“And a one, and a two…” anyone of a certain age recalls that iconic kick-start to a Lawrence Welk band number. I was incredibly lucky as a child because Saturdays (quite often) — I got the Texaco Metropolitan Opera, and the Grand Ol’ Opry and Lawrence Welk — an entire day filled with music.

That’s the use of “and” with which most of us are familiar. We think of “and” in its conjunction junction form uniting disparate objects — think peanut butter and jelly, kisses and hugs, singing and dancing, or even reading and writing.

A warm, cozy thought on a wild, rainy evening. As I snuggle under an afghan, cup of tea in hand — preparing for work “and” returns to the discussion. Whether you are helping a curious five-year old find a book about dinosaurs, dancing, that’s not scary or a college student craft an essay juxtaposing duality of dinosaur portrayals in science and pop culture — you end up using “Boolean expressions”. And that is, you ask?

George Boole is one of those math/science people that if you are reading this on a computer — you might want to light a birthday candle to him (11/2 in case you do), to Hedy Lamarr (11/9) and definitely to Grace Hopper (12/9) — there are many others, these folks just came to mind as I was thinking about “and.”

George was a largely self-educated, brilliant man who developed a way of thinking about information/numbers/life that could be largely answered “true” or “false”. For him, it all boiled down to math. His wife, much more mystical, contended that he had a flash of insight in his teens that left him struggling to pull all knowledge into its most basic form — she also believed that like the Beatles of the following century, he got loads of enlightenment from India. Hey, they did something right: they had 5 daughters — one of whom was the 1st female professor of chemistry in England, another a force in the field of geometry, and a novelist. Just to throw in a couple of the “begats”, one of George & Mary’s great-granddaughters worked on the Manhattan project and my favorite bit of Boolean trivia is that his grandson, Sebastian invented the Jungle Gym!!

What does fascinating life of the Boole family have to do with my simple conjunction? As we noted above, in your daily life “cheese & crackers” is connective, uniting and making a “we”, a “them”, a “together”. Using the Boolean “and”, becomes an excluder, denying entry to those not answering true. For example, take the curious 5-yr old who loves dinosaurs and dancing. In everyday conversation, you shift between them bringing the disparate elements together — there are books that are wonderful about both dancing and about dinosaurs. Using the Boolean operators, “AND” will find results that contain both words. “OR” finds results about either word and “NOT” excludes. For example, “dinosaurs AND dancing,” would bring up books that must contain both dinosaurs and dancing (raising the horrifying possibility of a “Barney” resurgence), while dinosaurs OR dancing offers resources about either topic, whether it’s a Gene Kelly retrospective or The ultimate dinopedia: the most complete dinosaur reference ever by Don Lessem and published by National Geographic. As you can imagine, there would be a lot more results under the “or” canopy. So, in library language per the logic of Boole, “and” is exclusive, while “or” is broadening – that’s fantastic for focusing or gaining scope on a research topic. Yet, I prefer the warming unity linking dreams, ideas and passions…. always the possibility of addition, bringing more delight and abundance. 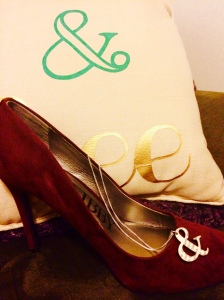 I get up every morning determined to both change the world and have one hell of a good time. Sometimes this makes planning my day difficult –> EB White